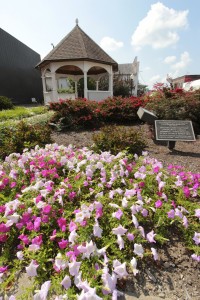 Our city’s namesake, Jean Baptiste Du Quoin (sometimes written “Ducoigne”), was born on January 21, 1750. The son of a Frenchman and a Tamaroa Indian woman, his life was characterized by contrasts and conflicts. He was baptized at the Church of St. Anne outside Fort de Chartres, yet was made chief of the Tamaroa Indians in 1767. His very first year as chief saw the dissolution of the Illinois Confederacy of the Tamaroa, Kaskaskia, Michigan, Peoria and Cahokia tribes (organized in defense against the Iroquois) when Chief Pontiac was murdered in Kaskaskia by Michigan Indians. The others responded with force, driving the Michigan tribe onto Starved Rock and ultimately starving them out completely by 1769.

In 1800, Chief Du Quoin merged the Kaskaskia, Cahokia and Tamaroa tribes into a new confederacy which went to war against the Shawnees in 1802. Their battle with the Shawnees in the prairies east of the Big Muddy River ended with both sides nearly annihilated. Most of the survivors were Kaskaskias, so Chief Du Quoin is often referred to as Chief of the Kaskaskias. He died in 1811 and his son, Louis Jefferson Du Quoin, became chief.

Du Quoin’s tribe had a winter camp on the present site of the Old Du Quoin, hunting and trapping along Little Muddy and the nearby creeks. The camp was located on the main trail from Shawneetown to Kaskaskia and it offered shelter and hospitality to travelers, since the chief was himself half white. Jarrold Jackson stopped there in 1803 and staked out property on the Little Muddy, becoming the encampment’s first settler and beginning the gradual growth of Old Du Quoin out of the seasonal camps which the Indian hunters had established.

Construction of a new rail line running from the Great Lakes to the Gulf of Mexico began around 1840, passing just west of Old Du Quoin. A new town, fed both by original settlers moving closer to the railroad and an influx of new faces stepping off of the train at “The Station,” sprung up quickly in the early 1850s. Isaac S. Metcalf, a civil engineer from Maine, and Chester A. Keyes of Old Du Quoin laid out the new town by the railroad in 1853 and called it Du Quoin. Comprising the central section of the present city, the town was officially dedicated on September 20, 1853.

The arrival of the railroad also made mining an important industry for the area in the mid 1800s and it remained so for many years, but it was the reclamation of former mine ground 1920s that shaped the city’s future tourism industry. In the 1920s, William R. Hayes purchased reclaimed mine land with a vision of what would become the Du Quoin State Fair. A longstanding tradition in the community which for many years was highlighted by major horse races such as the Hambletonian and the World Trotting Derby, the Du Quoin State Fair is just one of a number of events which bring visitors to Perry County from around the United States.